In the opening of Episode 1.5, where George goes undercover as the model, Dana slipped and fell 10 times in order to get that shot and was rewarded with a lovely bruise.

Snacks of choice on the Fletcher set are sesame sticks and apple sauce.

Regan’s cat is called George (he was named before the show started). George gets very confused whenever scenes are filmed in the apartment because he is a cat that knows his name.

Many of the cast, including Maria Heidler and Patricia Yeatman, have worked on productions for First Stages Theatre in Toronto, where Regan is the Resident Sound Designer.

Almost everyone has taken turns in holding the boom – it has become a rite of passage on the Fletcher set. 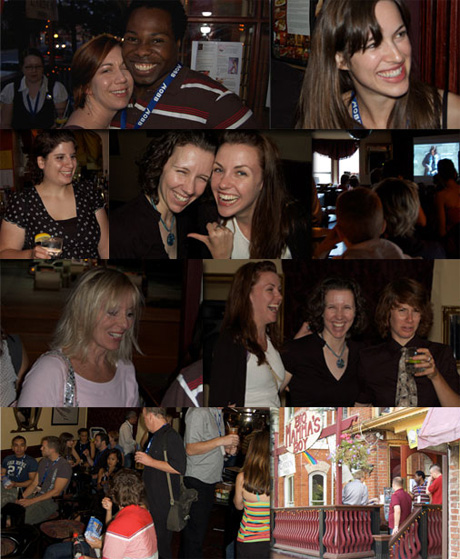 Big Mamma’s Boy is the restaurant featured in Episode 2.7 and the opening of Season 2. It is also where Fletcher held its Season 2 fundraiser (right).

The bunny on the top of the passenger seatbelt in Fletch’s car is called Flo.

Lindy and our make-up artist, Rikki Zucker, used to work selling medical scrubs for the same company that owns the scrubs warehouse featured in Episode 2.8.

In Episode 2.6, where George’s sudden illness forces her to take refuge on the couch, Dana fell asleep during filming lying across Lindy’s lap.

Regan Latimer and producer Rochelle Dancel met working in the box office at the Toronto Centre for the Arts. Various rooms and corridors at the TCA have served as locations, including the offices of Fletch and George and Chief Marlowe. The refrigeration room, where drinks for the venue’s bar and concession stands are stored, featured as the walk-in fridge that Fletcher gets trapped in in at the Dip ‘n Sip Bakery.

Two sets of Dads have appeared on Fletcher: Regan’s Dad, Robert Latimer-Cornell, played Denis The Security Guard in Episode 3.4, and Lindy’s Dad made a cameo as Mr Kinsey in Episode 3.1.

The book club in Episode 3.3 is the Toronto Women’s Bookstore who played host to An Evening of Lesbian Webseries with Fletcher and our friends from Seeking Simone over Toronto Pride 2011.

George and Jenna’s dog, Mona, made a cameo in Episode 3.2 when the Mums returned from vacation. Mona actually belongs to Sean Tasson and Jonathan Thomas, and she was so excited when that scene was being filmed in her apartment that she made an impromptu appearance in every take.

Lindy had a ten minute crash course in how to fall before she was let loose in Episode 3.1 with the GTA Rollergirls. Thankfully, everyone emerged unscatched.