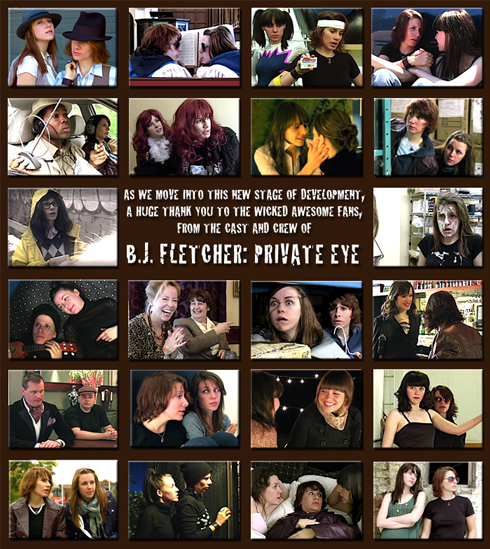 Regan Latimer, creator and producer/writer/director of web series B.J. Fletcher: Private Eye, has signed a development deal with Toronto‐based production company Matter of Fact Media. Under the terms of the agreement, Latimer will work with MoFM Executive Producer Vanessa Dylyn to develop a television broadcast proposal for the web series, including a new pilot script based on the hilarious characters and adventures from B.J.Fletcher: Private Eye.

The online team behind the web series will continue to produce original content for the show’s website and blog during the development period. Regardless of the format in which it continues, unique content from the show will continue to be made available online.

Latimer announced, “It’s an exciting time for everyone involved with B.J. Fletcher: Private Eye. We need to thank our wonderful fans and viewers, whose tremendous support has been a huge part of this development. We’re also very grateful to the blogs and websites that have actively promoted us.

“We want to say a special thank you to Sarah Warn and all of the team at AfterEllen.com for giving us our break and supporting us through the first two seasons. They are very much part of the Fletcher family and we have learned so much from them.

“Our talented cast, including Lindy Zucker, Dana Puddicombe, Vanessa Dunn and Karim Morgan, and all of our production team, including Rochelle Dancel and Rikki Zucker, are committed to supporting the show as it develops and we are confident that our partnership with Matter of Fact Media will take Fletcher in a positive new direction. We look forward to bringing Fletcher back to your screens in the near future, more wicked awesome than ever!”