Vanessa Dunn: ‘Jenna was a rock’

Way back in 2008, Jenna debuted at the end of Season 1 in the case of ‘The Little Lost Lesbian: Run, Jenna, Run‘ for what should only have been a short story arc. Four years, lots of fan mail, numerous marriage proposals and two more seasons later, Fletcher favourite Vanessa Dunn reflects on web series heaven, the Fletcher Mums and being George’s rock. 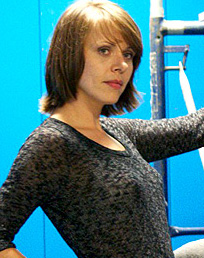 What was it like stepping back into Jenna’s shoes after such a long break away from filming Season 2?
It was nice n’ easy. I had thought it might take a couple of takes to get back into the swing of things but really, as soon as the camera started rolling, Fletcher, George, and Jenna were all there.

How, if at all, do you feel your character has changed/grown over the course of the series?
You know, if there was an award for absolute consistency, it would go to Jenna. Jenna is what she is and has been from day one. Her relationship with George grew in the sense that they became more of a couple, more domesticated. But at the end of the day, while George was restless, never quite settling into the partnership, Jenna was a rock.

Jenna and George’s mothers became a law unto themselves by the time the show finished. How did you enjoy working with the Mums?
There is not a weak link on this show and certainly not an un-fun one! I love when “the mums”, Fletch, George and I all share scenes together. It becomes one big crazy circus of estrogen funny!

I am also of the thought that ‘the mums’ should get their own show. MUMS, perhaps? 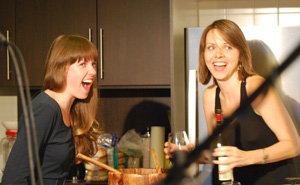 What was your last day on Fletcher like?
The last day was actually bittersweet. It felt like releasing these characters into web series heaven is what needed to happen. The story sort of led us there. And I certanly see Lindy and Dana all the time (we are friends in real life). But knowing that Fletch and Jenna won’t engage in another non-sensical spat nor Jenna and George engage in their sweet flirty way is sad. Alas, LIFE.

So what’s next for you? Where else can we catch you?
I will be performing in a musical called Paper Laced with Gold at the Harbourfront Centre in Toronto at the end of April. I am also collaborating with the artists Sean O’Neil and Liz Peterson on an untitled project that will be brought to stage this year. I have also completed my first short film screenplay which my dear friends, Michelle Mama and Stephanie Markowitz will direct and produce. I am set to play the lead (of course!).

My feminist art performance band, VAG HALEN, will be headlinging a show at the end of May. We are also set to play other dates this summer, including playing a fundraiser for Ms Sasha Von Bon Bon’s (who guest appeared this season as the french bartender with the great…assets) Summerworks show.

« Kimwun Perehinec: Season 3 newbie » Regan Latimer on how Fletcher has changed her life