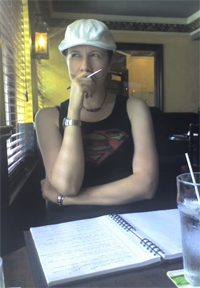 Fantastic news! The B.J. Fletcher: Private Eye pilot script is finished. It has been a long process, but we are all very pleased with the result.  Now the job of finding a home for Fletcherbegins. A little bit about writing the script. I had the absolute privilege and pleasure of working with the incredibly accomplished and talented George F. Walker throughout this process.  He has been a mentoring guide through the crazy world of writing and producing for television. Working with him has been a wonderful experience. He has a wealth of knowledge and background in the television genre including the creation of the CBC series This Is Wonderland and the current TMN series, The Line.  Having a mentor like this has been a dream come true, and the Fletcherpilot shines as a result (if I do say so myself).It’s been a new adventure to be able to write Fletcher without the inherent limitations of an unfunded web series as the ultimate goal. In the past, I have always had to limit Fletcher’s adventures and mischief to what knew I would actually be able to afford to produce – locations, actors, and production. It has been quite freeing to open up Fletcher’s world to all kinds of new possibilities – and the pilot is a wicked awesome adventure as a result.

Working with Matter of Fact Media has also been a positive experience. Going from the full responsibility and workload of producing Fletcher solo to having an experienced and knowledgeable production company and producer behind us has been amazing. Working with Vanessa Dylyn (our intrepid Producer) and MOFM has definitely created a more freeing environment in which to create and develop the series.

Little to say it has been great experience so far and I am looking forward to the continuing process of finding a new home for Fletcher in the world of television.  For those who have asked through the website and Twitter, a third season of Fletcher is currently on hold while we are in this development process. The ultimate goal is to create a television series that will incorporate the best of B.J. Fletcher so far and to expand those storylines and characters into a full-fledged long form series. I will certainly keep you all updated as this adventurous process develops.

As always, thank you so much for supporting the show. Exciting times lie ahead. Lock and load!