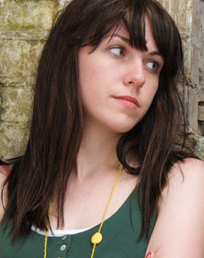 Ahead of the Season 2 premiere, we caught up with Dana Puddicombe on the set of Fletcher to talk about George, her favourite moments of Season 1 and the second season vibe.

How did you first come to work on B.J. Fletcher: Private Eye?
My old university roommate (Lindy Zucker) called me and told me about the project, and said that there was a part that would be fun for me. We had a reading a couple of days later… it was fun, and I wanted to be a part of it, mostly just to hang out with Zucker and have a laugh! It was originally just 3 episodes, and then we won the contest, so we made 7 more… and here we go again!

Tell us a bit about your background. Is this your first web series experience? How have you found it?
I am from Newfoundland and have been living in Toronto since July 2006. My background is in Theatre, so I really haven’t had much experience with film at all. It is an interesting experience, as the web forum invites so much more interaction with the audience… it’s pretty cool when someone posts a response to an episode within seconds of watching it. It is also amazing how far the show can reach in this forum… I have been contacted from fans all over the world… its pretty wicked to see how many women around the world access AfterEllen.com, and that our work can be appreciated in other corners of the world.

What do you enjoy most about playing the character of George? Do you find you share any personality traits with her?
George is fun to play, and also really challenging, too. She has a tough side, but she is a sensitive soul. I think she is still trying to figure herself out, and I really enjoy moments when she is faced with asserting her needs and wants. We definitely see more of that in Season 2. But overall, she is a fun character to play. She is quick and funny, and I get to have a big laugh helping her weasel out of the situations Fletch inevitably gets her in. I share many traits with George… probably too many to list.

What was your favourite moment from Season One?
Breaking into Tyler York’s house in Episode 9… that was the most fun. And in the very beginning of Episode 4, there is a brief moment when Lindy and I sneak out of a house. The entire shoot, we had begged Regan to let us do an elaborate exit… with forward rolls like you used to do in grade 3 gym class. We pushed and pushed and she said no. Then, when we attempted to do a serious take… simple, and just get out of there… I slipped and took a huge spill. It is in the blooper reel… that was pretty funny:)

How does it feel coming into a new season? What kind of vibe has there been on set?
It’s exciting… I am excited to share the next stage of this story. George and Fletch have lots to do in this season. The vibe has been pretty cool… it’s been stressful at times… I have a full time job aside from this! But it is so worth every bit of stress. Other than Lindy, I didn’t know any of the other people involved in the beginning. We are all a lot closer now, and can read each other. There is an honesty that wasn’t in our process before… it is definitely more collaborative. We have a wicked team, and if one piece of the puzzle was missing, it wouldn’t be the same.

Without giving too much plot away, what lies in store for George in Season Two? What do you see the future holding for her relationship with Fletcher?
George gets stronger. She gains a new confidence, which is not always a good thing and becomes less dependent… this changes everything. 🙂