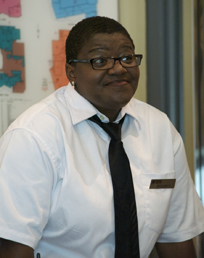 As part of our fundraising activities, Debbie became the lucky winner of a small but perfectly formed role in Season 3 (you can catch her in last week’s episode). We caught up with her after her Fletcher debut.

Tell us a bit about yourself? Do you have an acting background, or was Fletcher your first role?
Well first of all, I’m hilarious. That’s what I like the most about myself. I’m also very humble. I work as a proofreader, copy editor and writer – and I love what I do! I also love opera, dance, musical theatre, knitting, crafting and reading grammar and editing books. (Losing the funny here, I think…)

Fletcher was my first speaking role. In 1989, I was an extra in a remake of the Stanwyck classic, Sorry, Wrong Number. Our remake starred Loni Anderson. My part involved sitting at a bar with other extras pretending to have drinks after work. Loni’s mark was right behind my chair so I spent most of my time turning in my seat and staring into her perfectly coiffed hair. She spent most of her time trying to ignore me.

How did you first discover B.J. Fletcher: Private Eye?
Regan told me about Fletcher a few years ago when we worked together at Harbourfront Centre in Toronto. I think she was making Season 2 then. I started watching it stealth-like at my other job and had to keep from bursting out in loud guffaws.

What is your favourite moment/scene from Season 3? From the series?
My favourite scene in Season 3 so far – because it’s not over yet – is George and Fletcher sitting at the water talking about George moving to England. The acting is so well done. I almost cried when George told Fletcher she was leaving in two weeks. Poor Fletcher… I seriously wanted to hug her at that moment. I’m hoping my overall favourite scene is still to come – the scene where Fletcher and George finally confess their love for each other and get together. Fingers crossed this is how the show will end.

How did you feel when you first heard you’d won the walk-on-role in Season 3?
Thrilled then terrified. Trillified. 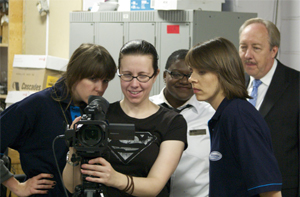 What was it like getting to work with Fletcher cast?
It was an absolute pleasure to work with the Fletcher cast. They were all so kind to me. I was intimidated because Lindy, Dana and Vanessa are professional actors with loads of experience and they didn’t know me from Eve. I mainly just tried my best not to be weird. That lasted until Take 2.

Do you have a favourite Fletcher character/cast member? Don’t worry, we won’t tell them.
Fletcher.

Did you ever crack up during filming?
Knowing me, probably.

What was the vibe like on set?
It was relaxed, comfortable and very efficient. It was clear these people had worked together before.

We had a great time working with you  – we especially enjoyed your wicked sense of humour! Who are your comic heroines?
Bea Arthur, Bette Midler, Carol Burnett, Liza Minnelli (think Arthur), Barbra Streisand, Alice Ghostley… (I’m an old-school girl.)