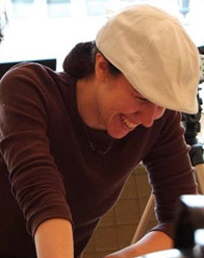 As we are approaching the end of Season 2, we catch up with Regan Latimer, Fletcher‘s writer/director/producer, on the creative process of keeping Fletcher fresh, George and Jenna and the rumoured Season 3.

How is it different going into Season 2?
The whole approach to Season Two was different from Season One. Going into Season One, we didn’t even realize it was going to be a season. Our plan was to do the three episodes required for the AfterEllen Web Series Contest, and wait and see what happened. Winning the contest meant going full hog to get the next seven episodes done. Season Two was more of a definitive decision on our part. We wanted to get it going as soon as possible as to not lose momentum. We also had a little bit of money behind Season Two from the fundraising we did, which was definitely great to have as it covered the cost of supplies and whatnot on the show. The fans really came through there, showing their support. Creatively, I had a little more time to plot out the season, not to mention having the established characters at that point to work with! It’s been an interesting process.

Have you been surprised by the audience reaction? What have the fans been like?
The fans have been really fantastic and supportive. There’s something to be said for the instant feedback we get through the comments on the AfterEllen site and through the feedback form on our site. We read everything and love hearing from the fans. There is definitely an aspect of surprise when it comes to the audience reaction. It’s great to know that people are watching and that’s it’s being well received. It takes a lot of work to put this show together and it’s an amazing feeling to know it’s appreciated and enjoyed.

Who is your favourite actor to write for?
That’s really difficult. I have to say I love writing for all of them. They each have such a distinctive voice in my head when I’m creating the show, and it’s always a joy to see the characters brough to life by every one of the actors. Specifically though, I love writing for Lindy and Dana. They know their characters so well, and the best part is they’re willing to do just about anything I write for them…from rolling around a church to knocking into patio furniture. And I love the way they can both shift between the comedy and the more dramatic moments in the show. It’s a great balance.

Which is the most difficult character to write for?
I would have to say the character that proves most difficult to write for is Jenna Watson. She is often the voice of reason that balances the crazy antics that Fletcher and George can get into, but that often leads to her being a very serious citizen. It’s a fine line for Jenna between being the serious responsible one and the fun loving caring individual that George has fallen for. I have to say that Vanessa Dunn treads that line with great talent, and careful consideration. I have been extremely blessed to have Vanessa apart of this series.

Can you describe your creative process?
Wow, that’s a huge question…let me see if I can sum up. I start by plotting out the overall arcs of the season. There is one arc that spans the individual characters development over the course of ten episodes, and then three arcs (roughly three and half episodes each) that make up the cases. I then plot out a beat sheet for every episode that basically consists of every important point that makes up the episodes. At the point I write the scripts and have one or two read-throughs with the actors, where we will figure out what works and what doesn’t. They give me feedback and insight based on their feelings on their characters and whatnot. I then lock in the script, confirm locations and casting, and then we film it! After filming on an episode is complete I sit down to edit the episodes and take them through the post production process (ADR/audio fixes, colour correction, writing/recording the background music) and then render them and post! It’s an extremely time consuming process, but also incredibly rewarding.

Coming out of Season 1, did you know that George and Jenna would be together in Season 2?
When I wrote the final arc of Season One, I thought Episode Ten was the last we would see of Jenna Watson, however, when it came time to film it, and I met Vanessa Dunn, I realized if we were going to do a Season Two, I would definitely love to have her apart of it. She brought so many dimensions to Jenna. By keeping Jenna around it also made for some very interesting story and character development for both George and Fletch. Vanessa and Dana have such amazing chemistry together as well, so having George and Jenna a couple in Season Two has been great for the show on several levels.

How do you tread the line between keeping the show’s appeal to your lesbian audience while not being a consciously lesbian show?
I don’t know that I would say we are not a consciously lesbian show, we just don’t choose to make the characters sexuality the focus of our series. The leads in our show are PIs who happen to be lesbians…not the other way round. It’s just one more aspect of who they are. Something I have always been interested in seeing, as far as lesbian programming goes, is for it not to be an issue, but just an everyday normal part of the character’s lives…as it is for those of us living as out individuals!

Speculation has been rife about a third season, which would be pretty unprecedented for an unbacked web series. Can you silence the rumour mill?
All of us who work on B.J. Fletcher would love to do a third season. In fact, the story arcs are already being created. We’re all on board for it, but we must find funding in order to make it happen. Making this series is a full-time job, and unfortunately we can no longer be putting in the time it takes us to do it without funding. We will be searching for sponsorship and funding and donations after the completion of Season Two…when we’ll finally have the time to do it. We definitely hope to make Season Three at some point (aiming for the summer). There are still lots of adventures for Fletcher and George still yet to come, and we’d be very excited to bring them to you!

Which scene are you most proud of?
That’s difficult to narrow down. At the end of each episode I am always so proud of everything we achieved and put in to make them happen. I don’t know that I could single out any one particular scene. I am more proud of everyone involved in the project. There have been scenes where when we finish the take I have a moment of feeling so blessed to be working with everyone I’m working with, from the extremely talented Lindy Zucker and Dana Puddicombe to our fantastic supporting cast, and especially everyone behind the scenes, like our amazing make-up/hair stylist Rikki Zucker who makes everyone look so fantastic. I am more proud of what we have done than any one scene in the series. It’s really been an incredible experience.

If someone else ran a competition for an online series, knowing what you know, would you do it all again?
In a heartbeat.